“Peter Kruse hated playing the piano. A strange place to start for a well-known Shenzhen musician who can play the guitar, ukulele, mandolin and, yes, the piano…”

Put your hands together for a local band with a sound that’s “Better than Ezra,” but “Less Than Jake.”

At least that’s what the three young members of Rufus Tree, an Elgin-based Christian rock band, have to say about their style of music, comparing themselves with other bands….”

6) Peter Kruse made a music video for a band called Spraycan Picaso, and it was featured on Blue Rymez Reviews.

“Bill Schenk as the songwriter and lead singer, bass groove by Daniel Putnam Green, Erich McMann on guitars, Keith Leedham taking care of the background vocals, and video editing by Peter Kruse. That’s 5 people coming together as one project to ensure their craft’s message will be delivered in its entirety.” (Link).

7) “City Weekend” Article about Shenzhen music: Covers and Originals at Coco Park in a Post-Raps World 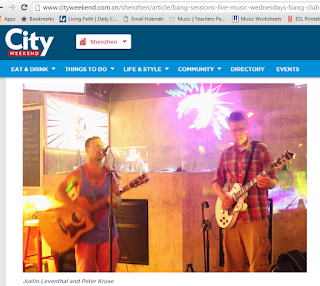